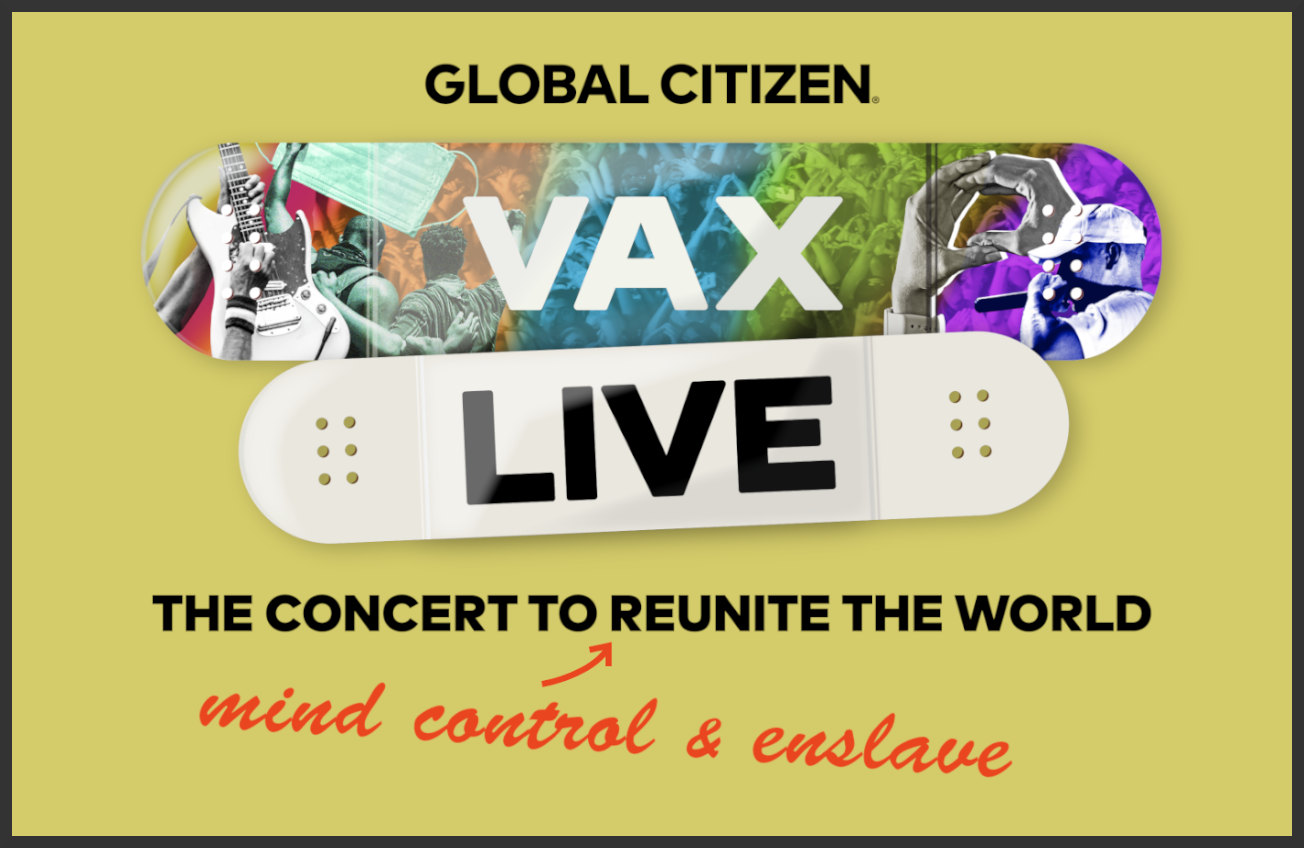 A Closer Look at the Official Vax Live Logo

Before Digging into the classic mind control down-is-up double-speak from “Prince Harry” and friends at this absurd event held in Los Angeles in early May, 2021 – aired on MSM TV May 8th – let’s take a closer look at the Vax Live logo. Some say our world’s criminal elite must abide by some kind of higher law forcing them to give out subtle clues as to what they’re up to, even as they lie their asses off and drive hell-bent toward their next planned disaster. And, whadda ya know? Click the image below to see clearly the satanic hand signs embedded right in the Vax Live official logo. 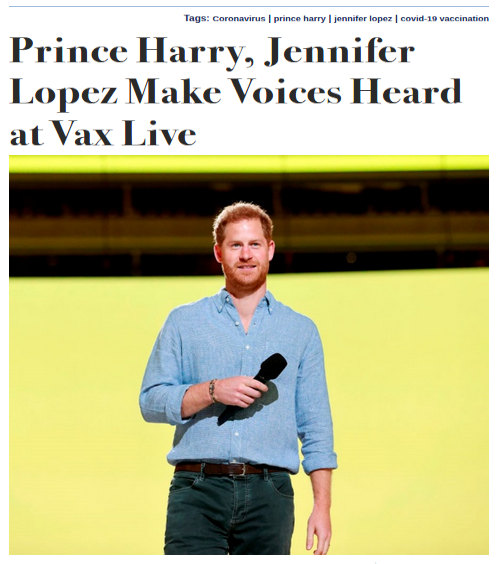 So touching watching “Prince Harry” explain the importance of “vaccines equity,” even among our world’s poorest (Windsor terminology: “useless eaters”). Aren’t we blessed to live on a planet with theatrical productions this creative, where down-equals-up per leading institutions and authority figures and where Draco-liaison “royals” can model professional acting skills to their lower-class trans-Atlantic thespian partners? What an amazing world!

From this article summarizing the “Vax Live” event held in Los Angeles in early May, 2021, we have this…

President Joe Biden spoke about the COVID-19 vaccination being safe, Prince Harry urged for the vaccine distribution everywhere and Jennifer Lopez embraced her fully-vaccinated mother on stage during one of the largest concert gatherings in Southern California since the pandemic rocked the world more than a year ago.

The event was part of a growing chorus seeking wider, more equitable distribution of COVID-19 vaccines. Global Citizen said $53.8 million in philanthropic and corporate commitments helped procure nearly 10.3 million doses, exceeding the goal for the Vax Live campaign. Prince Harry said providing vaccines across the globe is imperative, particularly those in the poorest countries. “The vaccine must be distributed to everyone everywhere,” the Duke of Sussex said. “We cannot rest or truly recover until there is fair distribution to every corner of the world,” he said. “The virus does not respect borders and access to the vaccine cannot be determined by geography.” 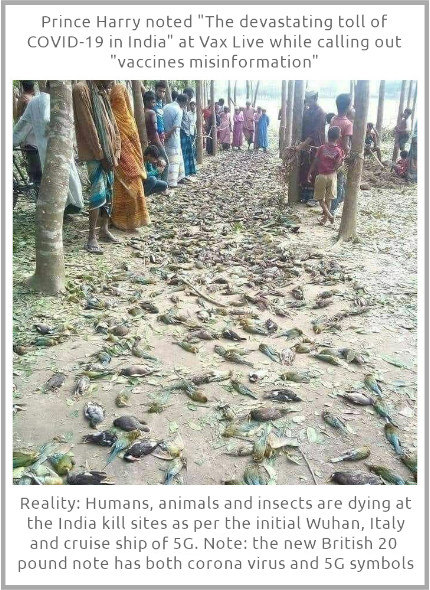 Then, from this press release about Vax Live, we have the news that “a Swiss foundation that prefers to remain anonymous” – Switzerland having the highest concentration of serious criminal networks and closet satanists anywhere the planet – will be among those contributing toward fulfilling Prince Harry’s heart-wrenching vax charity pleas. The same press release informs us that “President” Biden, “Vice President” Harris, little Emmie Macron from France and Canadian PM Justin Trudeau also attended Vax Live.

So, in case there’s any doubt as to why the Vax Live logo contains satanic hand-signs, the VIP attendance roster along with a member of the “British royal family” chairing the event should help clear that up.

From this press release, we also have this stunning display royalty European compassion…

Prince Harry and Meghan, The Duke and Duchess of Sussex, are helping lead a worldwide effort to equitably distribute the COVID-19 vaccine to everyone, everywhere, and will be delivering an important message for vaccine equity during the May 8 global broadcast and streaming special. The Duke and Duchess have also been leading a coordinated driver to raise critical funds for…a vaccine-sharing program co-led by the WHO.

“Over the past year, our world has experienced pain, loss, and struggle – together. Now we need to recover and heal – together. We can’t leave anybody behind,” The Duke and Duchess said in the announcement. “We will all benefit, we will all be safer, when everyone, everywhere has equal access to the vaccine.”

(Click the toggles to see the Reality vs. Dreamspell version)

Royal Message: The "vaccines" will really help people. That's what they're designed to do.

Royal Message: "The vaccine must be distributed to everyone, everywhere. We cannot rest or truly recover until there is fair distribution to every corner of the world."

Reality: This one can be considered conditionally true or false, given that it involves the classic Cabal and satanic elites technique of using common terminology with different definitions for the speaker vs. audience. In this case, the “we” Harry uses refers to the Euro “illuminati” cartels amid which his family occupy a central role, Charles and Philip both being foundational plandemic planners and catalysts.

Royal Message: "This pandemic will not end unless we act collectively with an unprecedented commitment to our shared humanity."

Reality: This could be interpreted as true if we put “pandemic” in quotes or if that word were changed to “plandemic.” In that case, it would be true that if there are not incarcerations and-or executions and asset seizures for the top Corona Crimes perps accompanied by a grassroots uprising to stop the related genocidal madness on the part of complicit governments and “public health” ministries, the vast intentional socio-economic damages created by its planners will not end.

Royal Message: "When vaccine misinformation and disinformation spreads magnified on social media and in parts of traditional media, it exposes a collective threat...I believe the misinformation is a global humanitarian crisis."

Reality: This is a true statement, albeit again involving classic satanic inversion, since the speaker knows the audience will misinterpret the term, “misinformation.” The misinformation campaign is in fact being led by Harryś father, Prince Charles, and his allied Euro closet satanist cabal elements from among the Committee of 300, the WEF and Bilderbergers, the UN system, CFR and CDC. IE: the same “misinformation” he’s spreading at Vax Live which, indeed, represents a “global humanitarian crisis.” Got to give credit to the ancient Vatican, Jesuits and Euro royals-n-lords set for mastering the arts of peasant mind control over millennia.

Those of us who’ve been around awhile recall the original mega-popular Latina singer, Selena, who was assassinated in 1995. Well, just as the Cabal swaps out news anchors with doubles – one of their low-tech “leadership continuity” methods – they arranged a subsequent Texas-born Latina pop star mega success in the form of Vax Live emcee, Selena Gomez. And, disturbingly, both have backgrounds that hint of SRA and mind control. 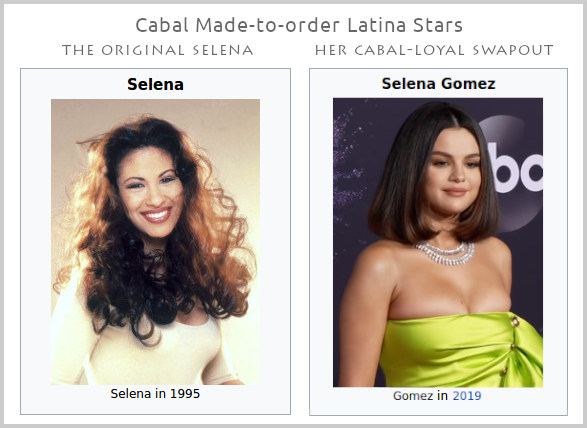 The original Selena was raised as a Jehovah’s Witness. Her father declared bankruptcy then pulled Selena out of school in the 8th grade to become the anchor of the family musical band he formed to pay the bills. When pulled out of school, her teachers were complained of child abuse by her father. Selena was brutally murdered in 1995 at the age of 23.

Also born in Texas, Selena Gomez was only 3 years old when the original Selena was killed. SG got her first big Hollywood break via a televised Disney series when she was just 10. Her career since involves other major Hollywood studios as well as fashion industry and UNICEF gigs, all sectors with known pedophila and SRA profiles. Her Wikipedia page notes that her role models include Christina Aguilera, Britney Spears, Beyonce, Rihanna, and Taylor Swift.
From this video clip about the Vax Live event, we have the following Vax Live comments by Selena…

I’m fully vaccinated and I want to do nothing more than to shine the light on why it’s important, why people should get it, and why other people who may not, you know, be a part of our country desperately need this as well.

We got to sit at home and be worried and scared and these frontline workers were there the entire time and giving their life for, for everyone else. So, I couldn’t be more excited to celebrate them, but also at the same time be on a stage, be normal again. You know, I think it’s so nice that we can celebrate that just for a moment.

Want to know what you can do to Stop the Madness in the USA and our larger world? Get involved in the Arise USA and Arise World projects.

Know somebody who just can’t believe governments, public health agencies, billionaires and media types are lying their asses off about COVID? Send them a link to this page (:

This recent update from Elena Danaan, on behalf of her Galactic Federation of Worlds contacts, again conveys the good news that the mainstream Earth NWO...
Read More

A 3rd Conversation Between Dr. Michael Salla & Elena Danaan   This is a fascinating conversation between our world's leading ET topic researcher and...
Read More

The Dark Fleet and the Cabal vs. the Alliance The Secret Space Programs Emerge into Public Awareness There's now growing awareness of the fact that huge...
Read More

Planetary Liberation, the Great Awakening and Being the Force Excerpts from March, 2021 conversation between Dr. Michael Salla (Exopolitics.org) and Elena...
Read More

DUMBS Warfare, The Great Awakening and Planetary Liberation During recent years there have been increased reports of ongoing warfare within the planetary...
Read More

Click Image below to watchHave an acquaintance, friend or relative who, even at this late stage of the game, thinks maybe they should get a COVID "vaccine" to...
Read More

COVID (aka: Certificate of Vaccination ID) Frightening COVID stats, no? No worries, because they're all complete totally fraudulent. For...
Read More

Excerpts from Solar Synthesis, the April, 2021 feature article by Lisa Renee During the end of 2015, the planetary lightbody began another bifurcation stage...
Read More

A Closer Look at the Official Vax Live Logo Before Digging into the classic mind control down-is-up double-speak from "Prince Harry" and friends at this...
Read More

This is a relaxed, relatively low-intensity yet insightful update from Max on the global COVID theatrical production currently playing in cities in towns...
Read More

(click the image above to watch the interview) Note: This video was originally posted to Youtube but deleted by Google during the first...
Read More