So, now, it’s trendy to get sex change operations. Children are being programmed to be “culturally sensitive” to trans-genders with satanic pedophilia preferences. Parents resisting the agenda are attacked by school boards and…the FBI. High school students are given a choice to use the pronoun “it” to describe themselves or one designating the opposite sex. Our world’s CIA and Cabal controlled mainstream media – the one mythical “military white hats” were to have taken over years ago – continues pumping out advanced psychological warfare sludge promoting trans-gender trans-humanism using the same techniques used to sell COVID lockdowns and injections.

One has to wonder just how lost the average person has become, that they are willing to be divorced from their basic essence by forces that are obviously deranged and motivated by a spirit of perversion and malice. When does the average human finally wake up, grow a backbone and shout, “Stop!” We await the answer. Meanwhile, Lisa Renee’s in-depth article for May, “Astral Reconstruction,” offers insights regarding the motives of the satanic forces acting primarily from the astral and etheric planes, seeking to hijack Earth humanity into a whole new cycle of false religions and parasitic lifestyles via their conjoined AI takeover, trans-humanism and trans-gender projects. 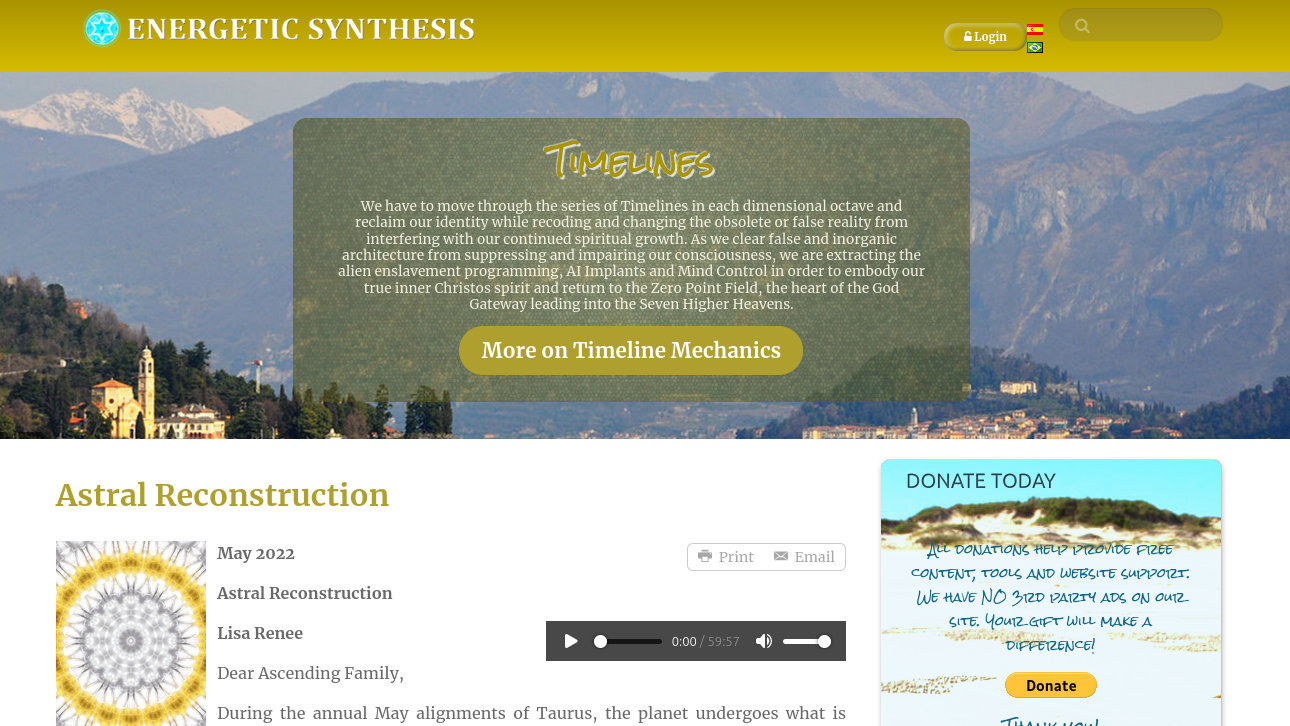 These are planetary events which project out into the collective consciousness as extreme misogynistic patterns targeting the organic and natural spiritual female principles. This sheer hatred of women and girls in order to suppress their rising spiritual power as Cosmic Mother returns, can be seen escalating in the mainstream media outlets. Humanity is being socially engineered to believe that the most beautiful and desirable women are actually men, transgender male to female, and this hidden and covert psyop of hiding the transgender agenda as it is being enforced on children, is the seed of the NAA’s rage-filled hatred towards the rising solar feminine principle.

Recent Guardian projects have extended into the astral plane level of reality of the soul matrix timelines, in which exploration of extensive artificial architecture was located and found to be used to harvest loosh and enslave humanity on the soul planes, through assorted ideological systems being reenforced through organizations. These make up extensive organizational structures like corporations, churches, hospitals, medical institutes, internet technology, pharmaceutical companies and many other systems that are used with the negative purpose to control the human collective consciousness via perceptions of reality from the astral and 3D matter planes. Effectively, what has been revealed is that the same massive megacorporation organizational structures that exist on the 3D physical plane have had an exact mirror organization on the astral plane, being run by power mongering human and nonhuman controllers that desire to totally enslave the surface dwellers to maintain their power base in multiple realities.

That belief systems can progress into dogmatic theocracy…the collective religion of COVID coined the slogan “Trust the science” and other key phrases used to incite trauma-based mind control systems for total obedience to the cult. Most people are not aware that the COVID cult is currently being reshaped into the trans-human trans-gender cult, being run by the same astral organizational structures. As a result, these sorcery based mind control energies are being exploited by the power-hungry spirit entities harvesting loosh on the astral plane and beyond.

This incredible manifestation of the Cosmic Mother within her Pillars of Cosmic Grace has not been welcomed by the Black Dragon Avatar Collectives, which have hijacked many of her body parts and sophianic dragon principles to proliferate satanism on the planet. Cosmic Mother’s return presents a direct challenge to the power structures of the Black Sun’s Vatican stronghold, in which her presence returning into the 5D inner gate has demolished black dragon timekeeper architecture and evicted and dissolved hierarchies of satanic AI-Hybrid gatekeeper entities. As Cosmic Mother, as the Cosmic Dragon retrieves her body parts and reclaims her children, this has generated many smaller Megiddo battles with black magicians and black dragons sending satanic ritual abuse curses and hexes in every direction from their intense rage that she has returned.

These entities have formed into massive bands or energy collectives that serve the hierarchies that are based upon the belief systems that make up assorted dogmatic ideologies through which they can harvest soul energies, with newly forming structures designed for harvesting the trans-human agenda. This includes shaping world religions and other beliefs systems into new types of secular religions such as “non-binary” communism. Observing the astral architecture forming to support trans-genderism and the fusion of human DNA with assorted machinery, makes it clear the NAA have put all their stock in growing trans-human concepts as the new socially acceptable collective religion.

The rise of Negative Alien religions began about 1,700 years ago for the purpose of mind control…to introduce anti-human ideologies that promoted holy wars, satanic blood sacrifice, genocidal agendas and the worship of Alien False Father Gods that repel any authentic spiritual consciousness development. Now that many humans are not willing to be controlled through the teachings of an angry False Father God in a classic religious context, the next stage of the invasion goals are to implement the new secular religions for growing gender-less trans-humans as the new planetary species…gaining loosh and using human bodies as batteries, in which the injections are designed to generate a trans-human gender-less species.