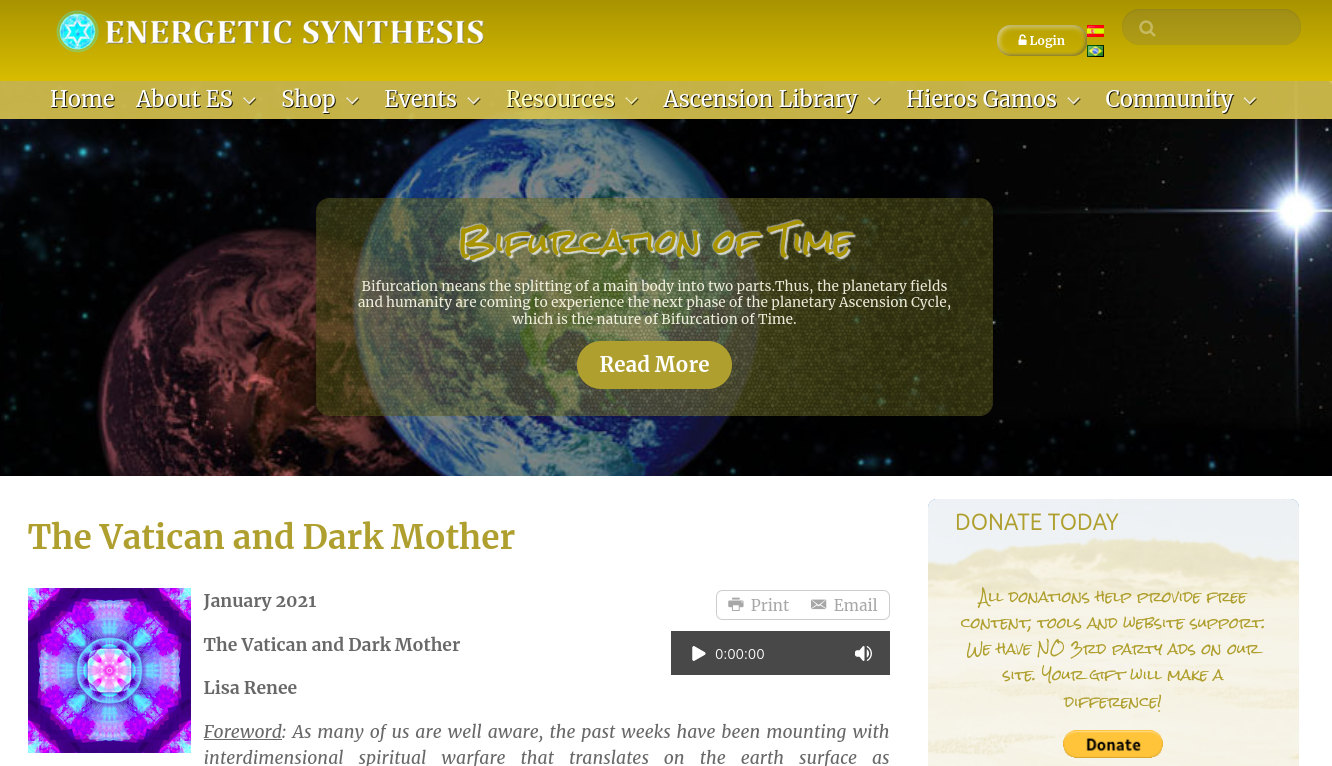 This in-depth article by Lisa Renee provides important background for understanding the central role of “satanic pedophilia” and other anti-life practices vis a vis maintaining control over human society and planetary resources during the past many millennia on Earth.

Lisa often uses the term “NAA” as shorthand for “Negative Alien Agenda,” referring to the Draco reptilian entities that are the archetype for all popular imagery regarding Satan – ie: the Devil – the same entities David Icke and others have been talking about for decades, as interwoven with the highest levels of the planetary human Cabal organigram.

Many insiders have testified as to the incredible control the Vatican and the Jesuits – and their “Black Pope” commander – have wielded over the past many centuries, within Earth’s overall “satanic elites organigram.” Such reports are reinforced by this in-depth review of the planetary architecture of dark control involving parasitic Draco (and other) entities on higher dimensional planes providing information, plans, support and protection to their Earthly minions in exchange for gruesome blood rituals and loosh-producing disasters of all types.

It’s a sick dynamic now well past its expiration date. As the planetary ascension processes proceed, as Earth’s vibrational frequencies continue to rise, as the astral planes purify, human DNA recombines and consciousness levels raise, all such mark the end of the long era in which the planetary and cosmic “forces of evil” network was able to control every aspect of human life. That, of course, is also why the ancient NAA-Cabal network is currently in such a state of panic. They know their time is up.

“The Vatican and Dark Mother” Excerpts

The Vatican City in Rome is one of the NAA Black Sun entity’s main control bases and global headquarters. It is the spiritual center used for carrying out the satanic ritual and operations for gaining wealth and material power for the globalist Luciferian bloodline families and funding their satanic agendas. The top power echelon in the Vatican is secretly working with the international criminal cabal government groups, the Jesuit military orders and the Luciferian bloodline families –together called the “globalists”– to carry out blood sacrifice rituals and child trafficking in order to nourish the satanic forces on the planet.

These elaborate satanic rituals are meticulously well organized to directly communicate and interact with the anti-Christ forces, mainly nonhuman entities. Through black magic sorcery, human sacrifice and blood harvesting, they receive detailed instructions from the off planet anti-Christ forces, to carry out the next moves for their One World Order agenda.

These black magic rituals, with child sacrifices, go back to the NAA invasion and the introduction of the Kabbalah teachings, when the Artificial Tree of Life and demonic hierarchies were presented in Babylon by the Saturnian blood worshippers. This spiritual template is still being used by Satanists and Luciferians worldwide, it is their religion.

Some believe they are the descendants of superior alien Gods and through the practice of blood ritual sacrifices, it gives them the means by which to contact demonic entities and their spiritual master, Satan or Lucifer, and carry out his wishes. Satanists and Luciferians are masterful deceivers who cloak themselves in many assorted names and labels, which go way beyond the Church of Rome, choosing their disguise to hide behind many different religions, atheism or secret societies. This makes them appear to be separate groups, but they are actually running the world under the same unifying umbrella of hidden satanic practices.

Since the Atlantian Cataclysm, these practicing satanists with hybridized bloodlines, sponsored by the NAA, have been enslaving humanity through instigating never-ending wars, racial discrimination, poverty, and blood sacrifice. Through divide and conquer manipulation tactics and increasing world suffering they maintain control over the human race. The Vatican, along with the draconian infiltration of the trained militants of the Jesuit Order, bring their combined objectives to infiltrate all world governments and cultures with the ultimate goal of achieving global satanism.

This includes the implementation of Armageddon software and instigating wars and conflicts in partnership with the NAA. The Jesuits are behind the key soft kill methods being used in the attempt to accelerate the death rate for global depopulation and eugenic models through deploying and weaponizing multiple toxic exposures: GMOs, vaccine injections, chemtrails, radiation, nuclear and toxic waste “accidents” and the trans-humanist agenda.

Their sinister plan is to destroy sovereign nations and cultural identity in so to lay the groundwork for the one world religion, which is based upon the open acceptance of practicing Satanism by the ruling elite satanic families. The cornerstone of these depraved practices includes child sexual abuse, child sexual ritual, human blood sacrifice, blood drinking and cannibalism.

Packaged as a religion that is desired and promoted by non-human alien entities, assorted lunar forces and demonic spirits, these most vile planetary controllers carry out abhorrent anti-human agendas. Covered in opulent robes, they publicly profess to be devout men of God praying for world peace, while behind closed doors, the top echelon is negotiating to incite terrorism, war and run child trafficking rings to every corner of the globe.

Pedophilia is a prime tool used by the NAA to conquer various races, planets and solar systems. This why it is prevalent in the organizations they control, such as the Vatican, the Catholic Church and Washington, DC. This destructive behavior has been genetically programmed into the alien hybridization programs with human beings in order to destroy the original 12 strand DNA Christos design of the human lightbody.

They seek to conquer the Earth by targeting the children as young as possible. This is one reason as to why all the world religions and organizations, formed to enslave humanity by the NAA, have major pedophilia problems in their leadership and representatives, even when they may not be practicing Satanists.

The Vatican and their armies have played a major role in the proliferation of global child trafficking and the pedophilia epidemic. High ranking Satanists oversee an assortment of international banking and criminal activities making them the wealthiest organization on the Earth. The grotesque amount of this stolen and accumulated wealth remains largely unknown in its accurate scope. The Vatican’s legal status as a sovereign nation with protected borders has made this wealth largely unaccounted for and tax free. However, it is known that the Catholic Church is the biggest financial power, wealth accumulator and property owner in existence on the entire planet.