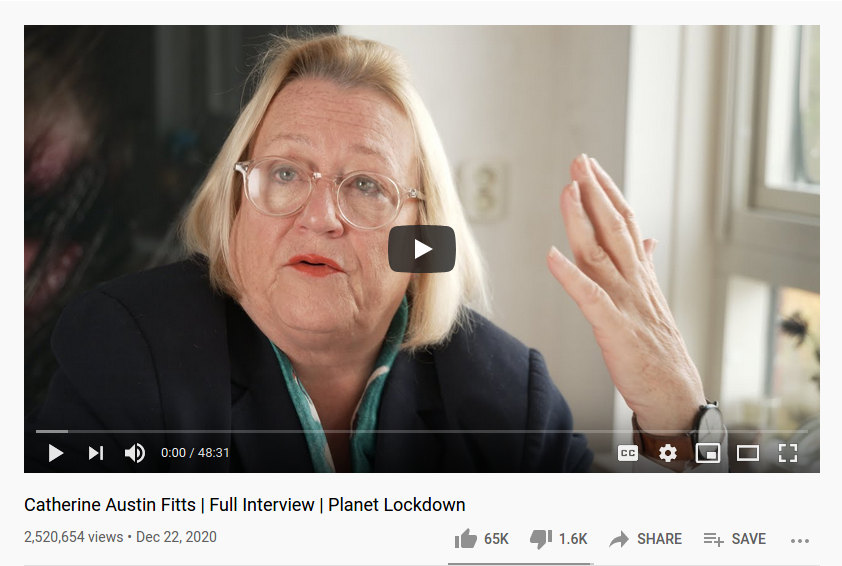 Note: This video was originally posted to Youtube but deleted by Google during the first week of Jan. 2021, after being online less than two weeks, by which point it already had over 2.5 million views! Why was it deleted? “Violating community standards,” natch. IE: people might OD on the truth. As disclosed by Youtube CEO Susan Wojcicki (mid-2020) Youtube now has a policy of removing prominent videos and creators who contradict the WHO-CDC official COVID narrative. This interview is now available at Bitchute.

COVID-19 is the institution of controls necessary to convert the planet from democratic process to technocracy. What we’re watching is a change in control and an engineering of new control systems. So, think of this as a coup d’etat. It’s much more like a coup d’etat than a virus. For 20 some years in the United States we’ve had a financial coup d’etat. At the end of 1995, a decision was made to move much of the assets and money out of the country. That was part of bubbling the global economy and they knew that once they’d finished moving all those assets they would have to consolidate and change the fundamental system.

You have your perfect magic excuse. Everything can be “The magic virus,” and it’s amazing because every consequence of your financial coup has been solved by the magic virus. If you’re a financial person and you look at the world through the mathematics of time and money it’s amazing that
anybody believes it but, yeah, they do. You join the cult and you say, “Oh, yeah. Well, the magic virus took all the money from Social Security. The magic virus caused our pension funds to be insufficient,” blah, blah, blah.

The technocracy that they’re pushing towards is what is called transhumanism. Essentially what you do is you use injections to inject materials into the body that create the equivalent of an operating system. So, everybody knows the idea of Microsoft causing you to download an operating system in your computer that gives Microsoft and a variety of other players a back door into your computer. You inject materials into your body that  essentially create the equivalent of an operating system and a receiver, and you can literally hook everybody up to the cloud. And that includes hooking them up in a way that their transaction system – you know, the Bible calls it the Mark of the Beast – is one way people know this stuff.

But, you’re you’re basically talking about being able to digitally identify and track people in connection with their financial transactions. So it’s a world of zero privacy. But what’s important to understand is if you then institute one or more central bank cryptos, you’re now talking about a system where every central bank in the world can shut you off individually from transacting if they don’t like the way you’re behaving. So many people are familiar with the social credit system in China. It’s very similar. If you install the smart grid in their car, their community, and now literally in their body, you’ve got 24-7 surveillance.

And if people don’t do what you say and behave the way you want, you know, they can and and will shut off your money. And they’ll also have spatial control. If they say you can’t travel more than five miles that’s it, because you’re in a complete digital control system. And it’s controlled by the central bankers through the money we’re digitizing, but it includes the human body as well and the human mind. So this system comes with complete control, not only of your ability to transact financially – which is hooked up to your body – but very sophisticated mind control technology through the media and those cloud connections.

So, basically, you’re talking about hooking up into The Borg. And so transhumanism and technocracy go hand in hand. Now, I would describe this as a slavery system. So we’re talking about shifting out of freedom – where we have freedom to roam and freedom to say what we want – into a complete control system 24-7 including mind control.