The first 33 minutes of this Sept. 24, 2021 update by Kim Goguen involves her claim to have recently shut down a planetary “archon network” linked to the Microsoft Azure (internet cloud) system, which she says was also intended to serve as the main global COVID-AI “Beast machine” linked to satellite programmable nano compounds in COVID injections and the planned “social credit” financial control system. If true, it’s obviously good news. Kim offers an interesting explanation of the etheric AI “archons network” she says was just switched off. Beyond the 33 minute mark, the update addresses what Kim claims have been unsuccessful attempts by Donald Trump and associated international factions to jump start a new global financial system, as described by this post. 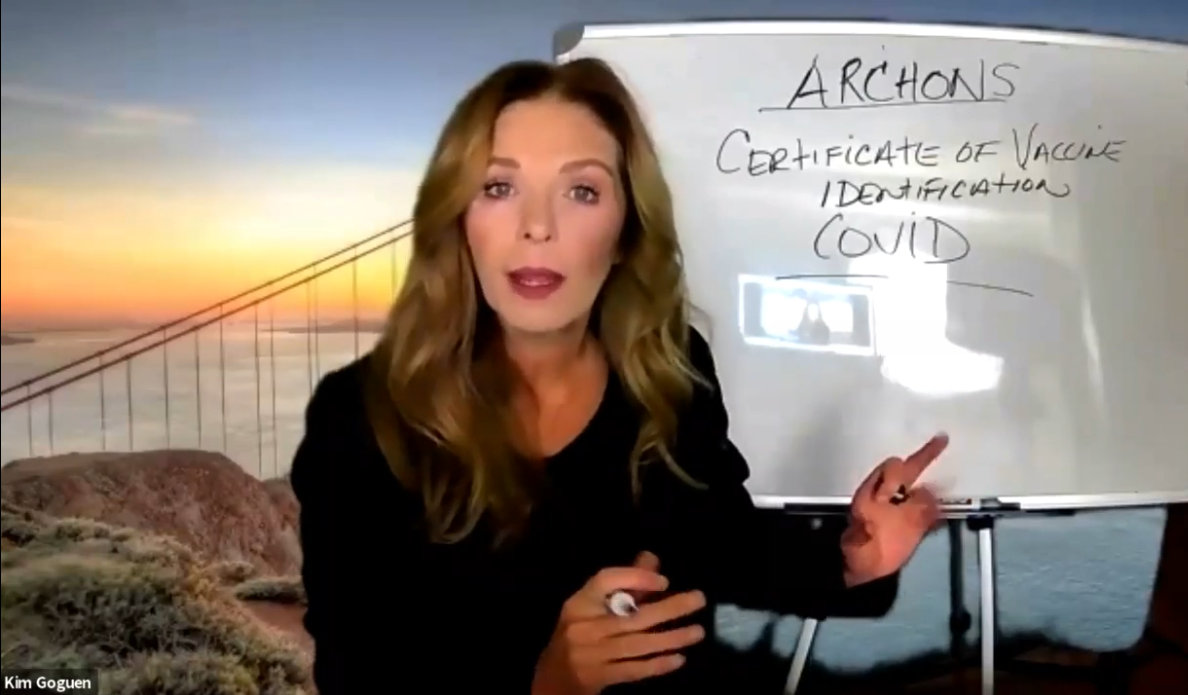 Beginning at 7 minutes, Kim defines “archons” as etheric parasites that have been controlled by a global AI system. It should be mentioned that others use the term “archon” differently, referring to powerful “archangels of the bad kind.” Kim makes the interesting claim that all parasites on Earth – physical and etheric – were “…implanted here long ago and linked to an alien AI system that’s been de-activated” recently.

Kim on archons and parasites

There are no parasites in pristine, original Nature. Parasites, in general, fit nowhere in the overall cycle of life. Bacteria makes sense, right, because things decay, they’re broken down, and then new life comes from that decay. So, Langley has a program [ie: the CIA]…those are all Black Sun run programs. People think that they released the corona virus. Okay, well, kinda sorta. The interesting thing is, we also found the mainframe this week, we shut down the mainframe. We stopped the communication from that mainframe. And then, today, we took down the energy grid associated with the archons. This energy grid went about 20 miles below ground and about 20 miles above ground [note: “Cobra” has often mentioned an energy grid of similar description] which basically covered everything.

Kim claims that all viruses and diseases – physical, mental and emotional – have been linked to archons operating on different levels. She says Earth’s archon-parasite system included some level of control by the CIA and DARPA, via “black goo boxes” that were “all part of the control system for the parasite, which is synthetic” (ie: inorganic).

So, we’re worried now about mRNA, we’re worried about vaccines. We talk about all this stuff, but where is it all coming from and where is it all going? Okay, so, let’s get to that part. So, in 2018, we did get hit with another blast of archons, like we do every year around the 21st of December. That’s when the alignment happens [with the Black Sun, dark portal inverse of the galactic Central Sun]. However, by 2019, that Central Sun was no longer a portal to the dark side. It was actually replaced with our Creator energy. So, archons…now, there was no influx of this since 2018. So, what do they do now? Okay. They need this to have somewhat of a control over the disease systems of planet Earth, and that’s not just people, either. This is animals, plants, you know. I mean, think about all the kinds of things that parasites infect. Our air, our water, our environment. So, now what do you do? Well…they invented the Certificate of Vaccine Identification, also known as COVID.

Kim claims that all cancer and auto-immune conditions are parasite related. She says the graphene oxide nano compounds in COVID tests, masks and injections involve a Cabal effort to replace the demise of the deteriorating planetary archon AI system (because of the galactic photon belt alignment also causing “climate change”) with their own biological monitoring and control system hooked to AI and the Microsoft Azure system, which Kim reports recently disrupting.

Now, it’s just a matter of disinfecting the planet. But, the interesting thing is that these – the synthetic parasites [COVID related graphene oxide nanos] – die from the most interesting thing, love. It’s a love frequency. They will wiggle, wiggle, wiggle and die. So, none of us should be affected by parasites any longer. Doesn’t mean we won’t have bacteria, we won’t have other things. But, our overall wellness should improve, hopefully, in the very near future. Also, we won’t be at the whims of some weirdo guy operating HAARP. who decides it’s a great idea to give you an infection of some sort.