Elena Danaan burst onto the scene in 2020 via interviews both with ET topic researcher and author, Dr. Michael Salla, and Laura Eisenhower. Elena reports having lifelong contact with a higher-dimensional Pleiadean network, one that seeded the ancient Celtic traditions Elena practices. Elena’s “Galactic Federation” updates  provide rare insights into planetary liberation struggles and breakthroughs of a sort official circles cannot or will not disclose. Elena has both a main website and active Youtube channel.

Elena Danaan is a rising star in the global disclosure movement. A lifelong ET contactee, she has had multiple recent conversations with Dr. Michael Salla and Laura Eisenhower, and now has a growing international following. Elena has reported major Good News involving unprecedented advances made by ET networks she refers to as the “Galactic Federation of Worlds” and an “Inter-Galactic Federation” evicting Draco, Grey and Cabal factions from their primary strongholds in this solar system (on the Moon and Mars) and Earth (global underground DUMBS network).

Elena now periodically talks with other contactee types to continue advancing the ET topic full disclosure agenda. This conversation is with Jean Charles Moyen – also recently interviewed by Michael Salla – who credibly testifies to experience within the Solar Warden SSP as yet another “20 & Back” SSP veteran.

Jean Charles reports serving on Solar Warden motherships “Solaris” and “Excelsior,” which have been mentioned by other SSP veterans. He says Excelsior and other such mothership have replicated entire eco-systems onboard which include natural landscapes, water falls and animal populations. Elena and Jean Charles laugh upon concluding they’ve both eaten in the same cafeteria aboard the Excelsior.

Jean Charles reports a childhood “abduction” experience, after which he had amazing powers including telekinesis, telepathy, hands-on healing and “inadvertent teleportation.” He says one of his SSP teacher-mentors was a highly-telepathic female Mantis ET. Elena reports also meeting Mantis ETs aboard GF ships. Jean Charles says that among  many reptilian ET races, some are helpful and work alongside Solar Warden. He recalls interacting also with aquatic and feline (“cat people,” “lion people”) ETs and many humanoid ET races.

Jean Charles reports fighting Draco and regressive races in our solar system. Saying he was mortally injured by the lashing tail of a black Draco while on a mission to rescue human slaves on Mars, he reports being healed by a med bed pod filled with liquid nano compounds. Jean Charles is producing a two-part video series about his life story, titled “South Shore,” which includes cameos by Dr. Michael Salla, Elena Danaan and Tony Rodriguez. 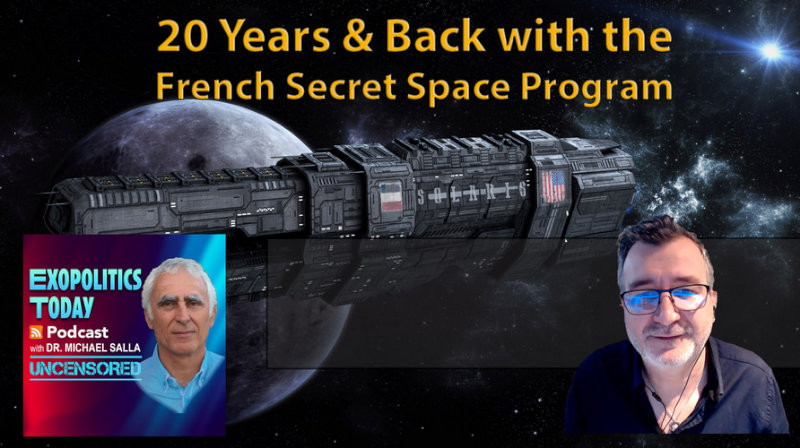 Secret Space Program “20 & Back” disclosures first went viral nearly a decade ago due to the testimonies of Corey Goode and William Tompkins, publicized via interviews and backgrounders published by Michael Salla, David Wilcock, Kerry Cassidy and others.

William Tompkins came forward at the age of 92 to testify about a 70 year career involving the development of “black budget” SSP programs for the US Navy, starting in the WWII period, when he was involved with a USN unit tracking the development of the Nazi-Draco alliance which became the Antarctica based “Dark Fleet” (aka: Nachtwaffen) SSP which – via Operation Paperclip and the ICC – progressively took over the military-industrial complex both of the US and NATO nations.

Both Tompkins and Goode testified to the existence of a major inter-galactic fleet developed by the US Navy (Solar Warden) and the routine use of “20 & Back” programs, of the same type Jean Charles reports in this interview. In recent decades, Solar Warden has been the only Earth-based SSP active offsetting the growing dark axis SSP grip on Earth and our solar system led by the Draco-Greys aligned Dark Fleet and ICC (Interplanetary Corporate Conglomerate) SSPs.