This report of yesterday by RealRawNews.com claiming that California Governor Gavin Newsom was arrested last week, related to his COVID cartel role along with other treasonable offences appears to be true, given the source and nature of the information. Assuming that, it’s a profound reason for Californians to give thanks during the upcoming Thanksgiving holidays and an early Christmas gift to the entire world, in that it signifies what appears to be major if belated push-back against the deadly global Corona Crimes agenda. 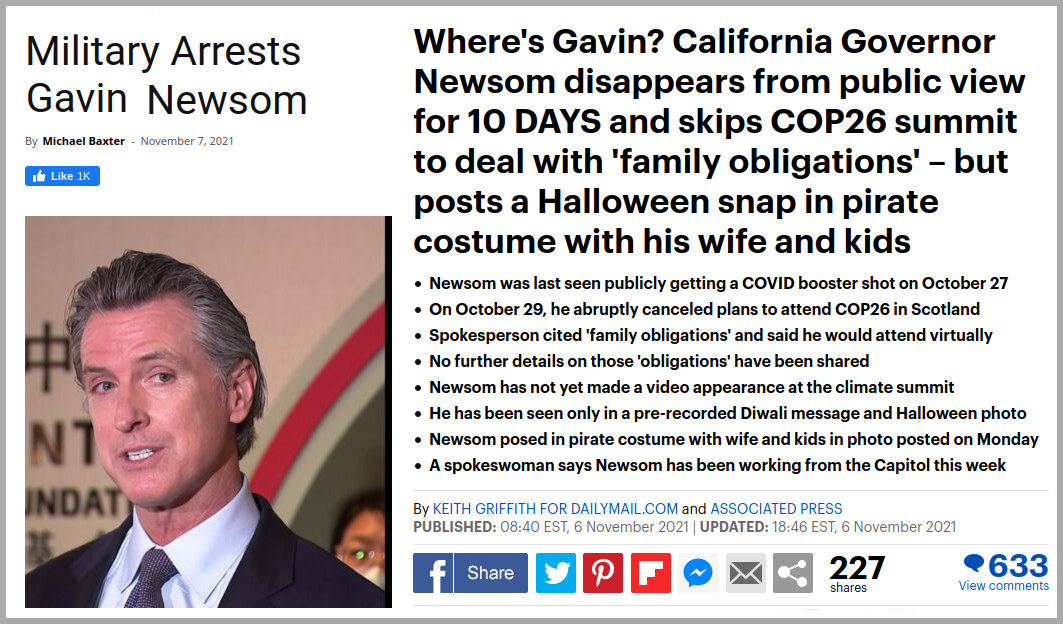 Click the image above to visit the RRN report then scan this report by the UK Daily Mail about Newsom’s unusual absence this past week, including not attending the big COVID-n-Great-Reset COP26 “climate change emergency” confab in Scotland and also not attending remotely as promised.

Leading politico wolves-in-sheeps-clothes types – like Gavin Newsom, Andrew Cuomo, Bill Gates, the Clintons and many others who most have believed care about their professed values – eg: women and children, the environment and public health – have actually been, as committed researchers (aka: “conspiracy theorists”) know, leading US and global society toward an unspeakable Hunger Games hell.

All that appears now to be in the process of being more unwound and revealed, despite the long-running MSM truth embargo. It’s heartening to believe that the major long-promised institutional swamp draining process may be finally getting underway. What should become clear as that unfolds is that it’s an international and bi-partisan process, since all the major political parties and key institutions in our world have long since been run by psychopaths, frauds and kleptocrats.

In terms of coming to terms with who and what Gavin Newsom is, the video below is instructive. Gavin is the scion of one of California’s most powerful political families, one intimately tied to the Pelosis, Browns and Gettys and fellow cartel politico kingpins Adam Schiff, Diane Feinstein and Kamala Harris. Did you know that Gavin Newsom is Nancy Pelosi’s nephew? Yup. Did you know that Nancy Pelosi’s father was an Italian Mafia boss who ran heroine with Lucky Luciano? Yup. Did you know Gavin Newsom’s father was a key figure in the administrations of both Pat and Jerry Brown, the latter a pledged Jesuit?

Know what the “secret religion” is of the Jesuits, the Italian Mafia and most Zionists? Yup, Satanism. It’s another topic on the Great Awakening playlist, as Sean Stone’s new Best Kept Secret series indicates. A key prophecy for the current period is that “all things secret shall be revealed.” Looks like it’s finally getting underway. 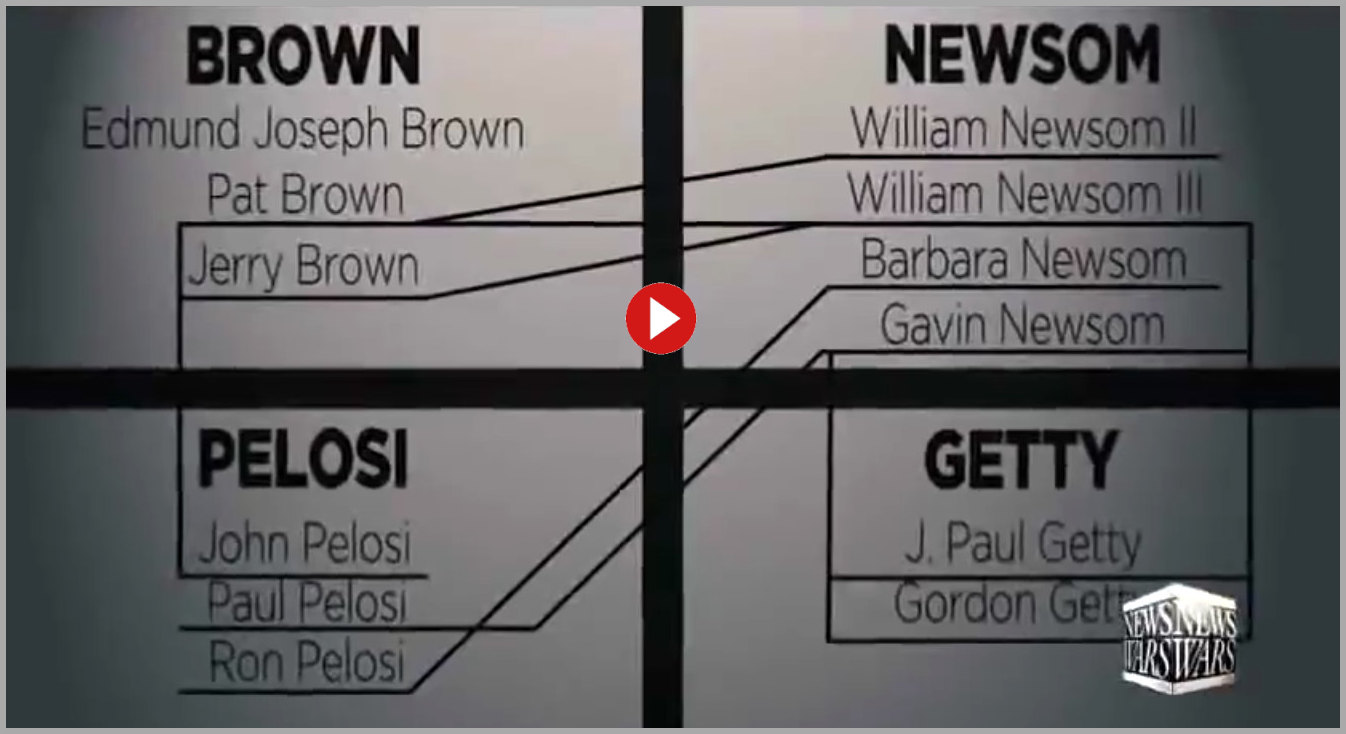 As for treasonable charges related to Gavin Newsom which NSA genre communications access might prove, possibilities include – 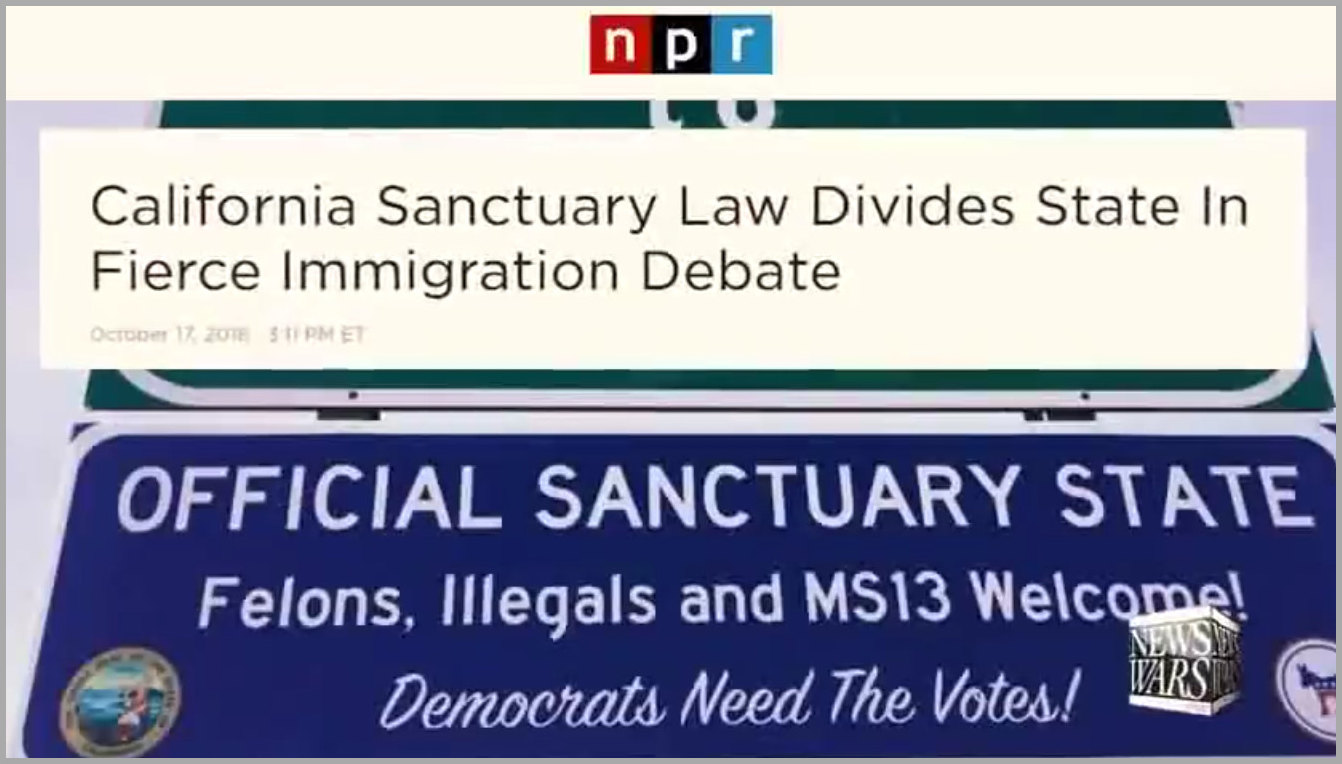 The good news is that it appears our fabled US military white hats network – the one that’s been promising to “drain the swamp” for years – looks to finally have moved from saber-rattling to action, with more soon to come. Whether that will justify the phrase “mass arrests” or not remains to be seen. But, if the RealRawNews.com reports are for-real – as they look to be – the results already are impressive. Cabal capos they claim to have recently sidelined include the Clintons, Bill Gates and Andrew Cuomo, with Gavin Newsom now on the docket.

What is definitely confusing, however, is the implication – both from the RRN report and the linked UK Daily Mail story – that Newsom’s “COVID booster shot” publicity stunt involved the for-real deadly Moderna formula. It’s understood that top politico-celebrity “vax photo opps” – like those of Donald Trump and daughter Ivanka, and Tony Fauci – involve saline solution or “Hollywood syringes.” It begs the question how it’s possible Newsom might have actually been injected with the Moderna mRNA herd-cull formula, involving dangerous to deadly effects. It’s virtually impossible Newsom wouldn’t know better, which raises the possibility someone may have done a vial switcharoo. Wow! Maybe the planetary karmic processes are finally working!

The post above, made yesterday, relates a report that California Governor Gavin Newsom was arrested Nov. 1 by US Marines, as reported by RealRawNews.com. Two days later, the issues are already getting muddy, as the same website released two followup articles, the first one saying that, earlier today (Nov. 9), a “Newsom doppelganger participated in a fireside chat at the 2021 California Economic Summit,” adding, “The Deep State had a Gavin Newsom in-waiting. Although the identity of the imposter remains a mystery, he and the real Newsom share a remarkably similar physique and facial structure. The Deep State spent nearly two weeks training the new Newsom to emulate Newsom’s mannerisms, posture, and speech pattern, our source said.” 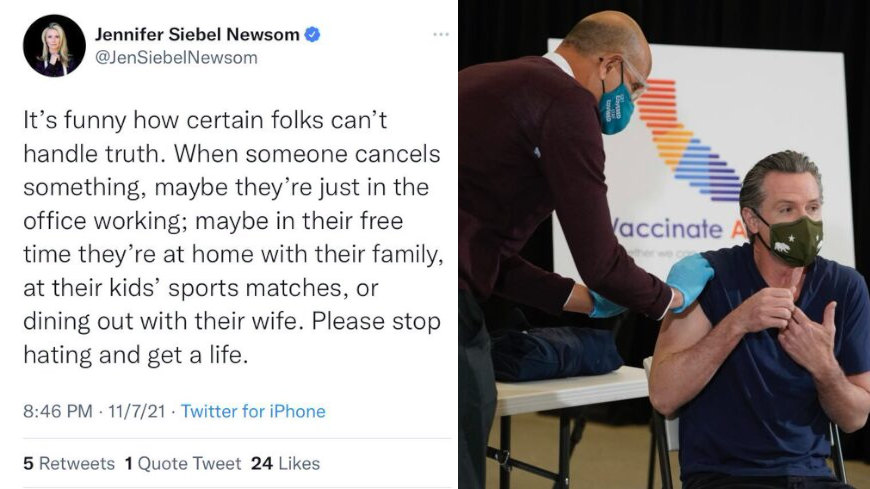 The tweet above, made by his wife, was evidently deleted within hours of making it.

Hmmm. We know is the stakes are DEFINITELY EXTREMELY HIGH per anyone like Gavin Newsom being captured and flown to Gitmo – related to his COVID and other Deep State activities – he being a leading up-and-coming US Cabal kingpin. We should thus expect smoke, mirrors and fervent denials if the RRN stories are for-real and Deep State dirty tricks. Newsom’s 1.5 week unexplained absence is definitely strange, and long enough to pull in a “replacement.” Beyond standard look-a-likes, clones – yes, human clones – have been “fabricated” for selected top politicos in order to keep critical agendas running, several US underground bases involved in that.

The other Newsom followup RRN report today, Gavin Newsom Awakens from Vaccine Coma at GITMO, says, “Failed California Governor Gavin Newsom got a rude awakening, literally, when he first opened his eyes Monday morning following a 11-day-long vaccine-induced coma that he fell into shortly after receiving a Covid-19 booster shot.” It has Newsom saying, “Placebo. I was supposed to get a placebo.” IE: he was supposed to be injected with saline solution. The report says US Navy Rear Admiral Del Crandall told Newsom, “You Deep Staters are always double-crossing one another. When medically fit, you will be put on trial, held accountable for thousands of fatalities.”

So, a great story or factual reporting? That RRN reports continue to reference the actual top lawyer for the US Navy – Judge Advocate General Del Crandall – alongside other factors, tilt the odds in favor of these RRN reports being for-real. Time will tell if Gavin Newsom is still at-large or not. Regardless, we can expect many legit reports of this general nature as the months and years unfold.